How businesses are innovating for long-term success

Show 80 coincided with the launch of TerraCycle’s groundbreaking LOOP initiative in North America and we sat down with their European General Manager to discuss how they are helping consumer giants innovate for long-term success and what it means for brand.

We live in turbulent times and to weather an ever-changing set of challenges, companies need to future proof themselves to ensure they keep growing. Innovation is key to this. In January 2019, Terracycle, the pioneering recycling company shook up the consumer packaging industry when it announced its innovative LOOP scheme at the World Economic Forum in Davos. LOOP unites a coalition of major consumer companies including P&G, Nestlé, Danone and Mars to trial refillable and returnable containers for some of the world’s leading brands in an effort to significantly reduce waste.

Such a large scale but incredibly positive disruption does present some challenges as well as opportunities especially for anyone involved in managing brands. A brand’s structure, format and packaging combine to create a key part of the total brand experience. Perceptions of quality, responsible resource management and the evocation of brand personality, values and emotion have as much to do with what sits around the product as the product itself. Post-Loop the difference between good and great brand management will be the ability to ensure not just relevance but also differentiation.

This was the second episode that we’ve produced in partnership with FutureBrand, and joining host Russell Goldsmith at the FutureBrand London office was Jon Tipple, FutureBrand’s Worldwide Chief Strategy Officer and Laure Cucuron, General Manager of TerraCycle to discuss how LOOP will change the packaging industry and what this means for brand owners. 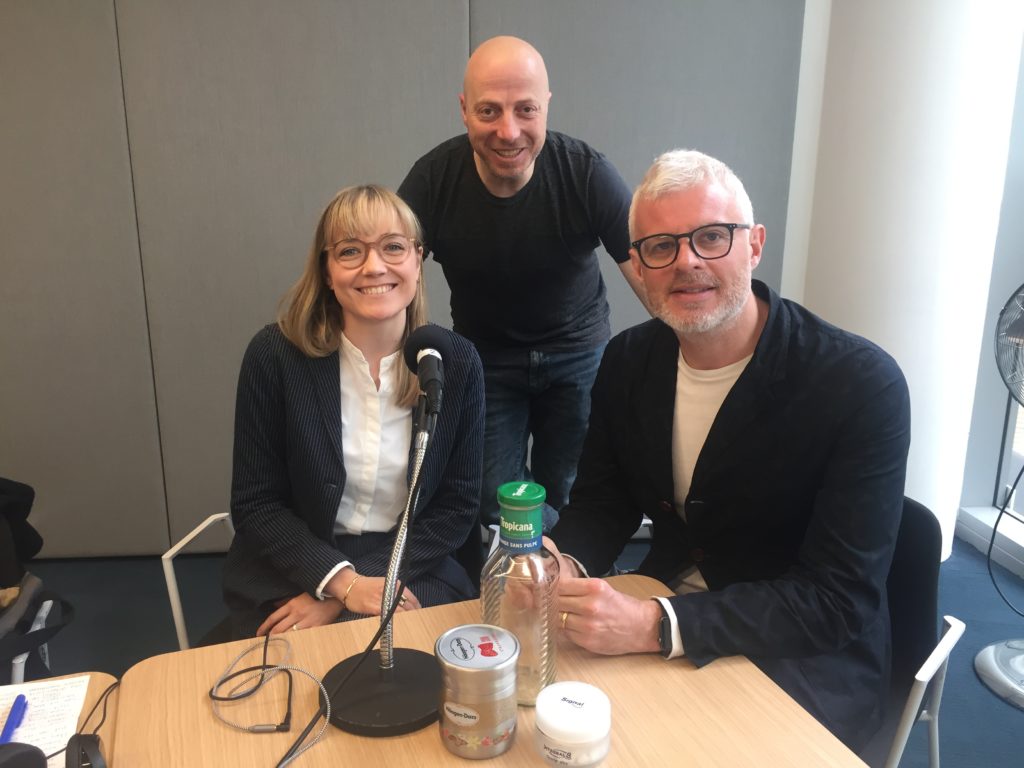 Laure explained that TerraCycle was created in 2001 in the US and opened in Europe about 10 years ago and now operate in 21 markets across the world including 12 in Europe.  She said that they have a mission to eliminate the idea of waste and they do that by first looking at a solution to collect and recycle things that can’t normally be recycled and that end up in incinerators or landfill. This could be anything from coffee capsules to plastic wrappers, cigarette waste.  The company engages consumers in collection programs and then find recycling solutions for this hard to recycle material.   They also look at how to integrate more recycled contents in packaging in the first place, for example, using ocean plastic to make shampoo bottles.

To achieve this, TerraCycle works with major organisations, fast consumer goods companies and brand owners. For example, in the UK, they have a partnership with Walkers to recycle crisp packets, with Garnier to recycle cosmetic waste and Acuvue for contact lenses. Laure said that they really try to engage people in a change of behaviour by offering them solutions to recycle almost everything but most importantly, they also ask themselves the question ‘Is making everything recyclable and making everything from recycled content really the answer to the waste crisis?’.  She added that the root of the issue is disposability and single use, which is why they have created a new platform called ‘Loop’.

Laure said that collection is actually the key – segregating materials so that they can then recycle them is the key of the process.  To achieve that, they are engaging consumers in new collection and recycling systems. In the Walkers Crisps example, you can go to the TerraCycle website a search for ‘crisp packets’ and then you will be offered two choices

You are also incentivised by raising money for charity too – so there is an environmental impact and a social impact one too.

Jon said that what excited FutureBrand when they first heard about TerraCycle was on the purpose side of things.  As part of Interpublic Group, having a positive approach to the environment and the positive social making, positive social difference is something he added that the company is committed to. However, Jon added that changing behaviour, disposability, single use etc is also a big issue for his clients too. He therefore thinks that it’s important that a company that is involved in culture, involved in creating new cultures for brands, should be in tune with that world. He also believes that commercially it makes a lot of sense for his company to be at the forefront of some of the most exciting innovations that are happening around sustainability but also that are actually going to begin to change the world not just socially and environmentally but generally commercially for FutureBrand’s clients.

Jon thinks that innovation in big companies is about to come of age but typically to get new innovations through big organisations is a big challenge. He said that organisations are systemised to deliver what they’ve always delivered and generate revenue in the way they’ve always delivered revenue. The ability to then change that production line to incorporate new technologies is a big challenge that takes a lot of money and it takes a lot of commitment and it’s hard to do. He added that it’s not like the organisations don’t know that innovation is something they need to embrace or that they don’t realise that they’re being challenged by start-ups in the most valuable parts of their business but what they’re struggling with is how they find a way to make it work at the scale they need.

Laure said that Loop is launching in May 2019 in Paris and New York before expanding to London by the end of the year.  Consumers will be able to order all the products they buy today at a normal retailer. They will put a deposit on each packaging and then receive their own packaging, which will be very different:

Laure hopes this is something new that will convince a lot of people to move from a disposable lifestyle to a more durable lifestyle.

Once consumers get their products, they use them as with any standard product used today. However, when they are empty, they put them back in their durable Loop Tote bag and ship them very easily back to Loop, where they are then cleaned, sterilised and refilled and then each packaging can go back into the Loop system for hundreds of times.

Jon believes this has the unique benefit of making people feel good twice. It makes them feel good that they are doing something positive for the environment, but it also has the possibility to create cachet and create talkability and a degree of consumer discernment. He thinks this is down to the fact that TerraCycle’s ultimate motive for Loop is not predominantly a commercial one, but is about making a difference to people’s lives, the wider community and planet.

Jon can see that some organisations might inevitable struggle with this kind of change.  But he said that in the past, reasons for not adopting new environmental and sustainable packs and technologies has usually been, about CapEx but he thinks this now overcomes the CapEx challenge, as it is also an almost moral obligation to make the investment. He added that somebody once said “a principle is not a principle it’s cost you some money” and so if companies are purpose led, as most of them are or claim to be, then in order to live up to their purposes they are going to need to put a little bit of money where their mouth is. He therefore thinks that some of the more famous packaged good companies in the world will probably see things like Loop a fantastic opportunity to add some momentum and further ‘oomph’ into their own commitments to sustainable living and things.

Laure said that with the Loop system, packaging actually becomes an asset for the manufacturer, which is an incentive for them to make it as durable as possible but that’s also an opportunity for them to add functionalities, to change the design

Jon agreed and said that the consumer never wanted to own the packaging, they just want the product. Allowing manufacturers to really see that brand moment as an opportunity to really innovate therefore makes it quite revolutionary. He also sees it as a really exciting opportunity to create something new for the customer who has become relatively blasé about packaging from time to time and thinks that the ability to put something new into their minds that adds to their experience as well makes it a win-win.

Jon added that it’s important that marketing recovers its intangible side and that we appreciate the intangible value of brands and the experiences they can bring.  He thinks that in the hands of brand people, an innovation such as Loop creates huge new opportunities.

Laure gave an example of how they worked with Unilever to try and find a way to create a durable tube for toothpaste, which is very difficult to create because you need to be able to squeeze. So, they then changed the tube into a glass jar but thought about how they could put paste in a jar, so rethought the way the product is and instead of a paste, you will find tablets that you can use.  This also provided a further benefit in that it reduced the consumption of water too.

Loop will launch with two official retail partners in Europe – Carrefour in France and Tesco in the UK.  This was quite interesting for Jon as he said that if you look at the consumer-packaged goods businesses that those retailers are working with, i.e. PepsiCo, Unilever etc, those are the companies that he said need help right now as according to the FutureBrand Index, their futures look uncertain to some extent – consumers and other members of the public are ambivalent about the futures of these companies. He therefore said that the ability to start putting things into the market that are generally tangibly seen to be not just making a difference to the environment but actually are aspirational and interesting is one of those things that he thinks should be huge.

Jon said that Yual Noah Harari, the philosopher, talked about the way innovation and technology had the potential to reduce humanity down to a god class and a useless class, i.e., a very rich powerful few and essentially an ever more unimportant and generic the rest of us. Jon thinks that the brand equity of that is a potential threat unless mainstream mass market brands can find a way of making themselves meaningful and important again

For more information on Loop:

To download a copy of the FutureBrand Index, visit www.futurebrand.com