Winners from the 12th B2BMarketing Awards talked about why they think they walked away with the trophies in their particular categories. 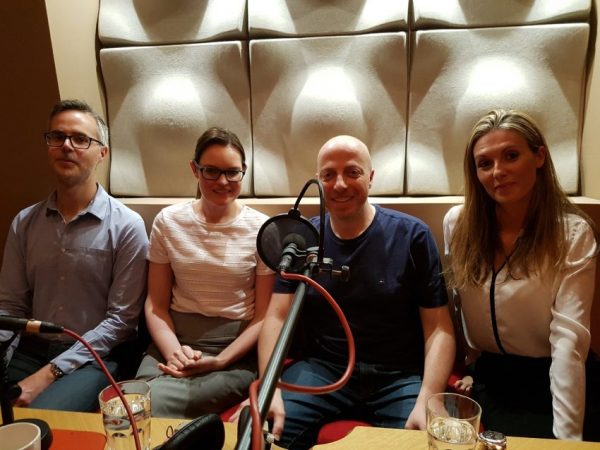 As was the case for both guests, this was actually the second year they had won an award at the event and for Catherine, whilst her team at Atos won Team of the year for 2016, the previous year, she personally won B2B Marketer of the year after spending the first 12-18 months after arriving at the business transforming the marketing function.  This was achieved by doing one-to-one reviews with different stakeholders across the business as well as team members, which resulting in needing to change the perception of the team.  Catherine explained that at the time, the [marketing] team were seen as very reactive and not visible, and so she set about changing that within the organisation to being a more proactive, more approachable and more professional team.  By setting a clear direction, strategy and aligning the team to the business objectives of the organisation, she was able to transform the business.  She also felt the real turning point, around five or six months into the role, was presenting to her executive board to show what B2B Marketing was really about, what her team were there to do and how they were re-aligning to the business, and then securing budget for the campaigns and activities that they wanted to do.  Catherine’s vision for her team now is to be known externally as pioneers, which she says makes them braver in some of the marketing that they are trying, but they continue to be focussed on return on investment (ROI) on everything that they do.  However, she was also keen to mention that from a Global perspective, they lead a centre of excellence on a number of different initiatives across an end-to-end perspective of the sales cycle, from client and market insight at the top end of the sales funnel, through to demand generation programmes supporting pipeline and closure of deals, to finally client advocacy.

It was fair to say that for Renaye, the size of her team and available budget to work with were at the other end of the scale to Catherine’s, which is why it was so good to have both guests on the show sharing their stories.  Renaye’s agency won in the B2B Marketing Limited Budget category for the second year running, in this instance for a campaign for conveyancing firm ‘When You Move’, which Digital Radish worked for from initial concept through to launch.  Renaye explained how the integrated campaign, localised by region, aimed to challenge the norm of conveyancing, which she said is known to be slow, with poor communications with the house buyer and estate agent, which leads to a frustrating process, with the estate agents often having to spend a lot of time chasing the conveyancers on behalf of the buyer. As part of the campaign theme, Digital Radish therefore created a concept of ‘lost time’, calculating how much time an Estate Agent would save on a daily basis by involving more technology in the process, and then, to make it more meaningful, showed what could then be done with that time saved.  A key part of the activity was becoming a disruptor to the industry through the development of an app that gives buyers, sellers and the estate agency the ability to track the process of the move.  In terms of KPIs, what was key for Digital Radish’s client was that they booked 100 meetings from the campaign, getting a response from 71% of their top tier 1 campaign targets.

When it comes to the key ingredients that make up a winning team or campaign, Catherine, Renaye and Joel highlighted the following:

When it comes to measuring the success of their campaigns, Catherine said there are a few different ways they achieve it.  Firstly, everything they do has to show an ROI in some shape or form and from a financial perspective, the three main areas they focus on are around:

However, what’s also key for Catherine are the qualitative metrics, including end-client feedback, which comes through anecdotal feedback and client surveys as well as internal surveys with business stakeholders too.

Joel added that from his judges’ perspective, what they are also always looking for in award winning entries is how they are aligned to the business objectives or have helped to move the business forward.