The first of three shows recorded at the Global ICCO PR Summit, Oxford.

Part 1 of this episode was on the topic of Talent Creation, Recruitment and Retention within the PR & Communications industry.

Joining Russel Goldsmith for Part One were Mohamed Al Ayed, CEO and President of TRACCS, Tanya Hughes, President of SERMO, Talk PR’s global network of independent communications agencies, and Susan Hardwick, Co-Founder of Global Women in PR. All three had just been part of a panel session at the conference.

The guests agreed that the critical issues that were being discussed around this topic were global.  Tanya explained that a key theme in her own Group’s international conference was not just on finding the right people, but keeping them happy with job satisfaction and work-life balance too.

When we spoke with Weber Shandwick’s Colin Byrne in Cannes, he said the big issue was the fact that PR agencies’ approach for talent has been to steal each other’s staff and that actually PR needs to recruit the kind of people who are currently going to work at Social Media Platforms or the World’s top Advertising and Digital Agencies.  This was something Karen van Bergen, CEO of Omicom Public Relations Group also touched on in her opening keynote at the ICCO Conference.

Sarah agreed.  She explained that her Spanish agency’s Head of Digital came from an advertising agency and in their Hong Kong agency, they’ve just recruited a creative from a Film Production House.  However, she warned that it works both ways as she’s seen her own talent recruited by Ad and Digital agencies too.

Given Susan’s role in Global Women in PR, when asked if one way of keeping talent in the industry was to tap into the growing freelance network, particularly in encouraging mums back into the industry, she said that whilst freelancers plug gaps, do project work, add value when necessary when you don’t need to employ somebody for 52 weeks in the year, or offer specialists to balance out the team.  However,  the difficulty, particularly in relation to mums coming back to work, is in dealing with is the very big gap between leaving work to have children and coming back, as our world changes very rapidly.  She therefore feels there needs to be work on both sides, i.e. perhaps offering retraining to allow returning mums to get up to speed.

Sarah added that in her experience, she felt employers are actually fairly flexible, certainly in her agencies, particularly in creating work-life balance and ensuring people are happy at work.  However, she said that recent experience for returning working mums, particularly after having their first baby, can be a bit of a shock and given the PR industry is a service industry, even if people are working part-time, they are expected to be available to service their client and do longer working hours.

H+K Strategies’ Richard Millar previously said on this series that that the make-up of his agency had fundamentally changed over the last two or three years and that he couldn’t remember the last time he interviewed someone with a typical PR background.  Mohamed made an interesting point on this as he talked about the evolution of the word talent, where it has evolved from ‘employees’ through ‘resources’.  He agreed in that those people who PR recruits don’t need to be PR people by education.  However, in his view, talent is defined by the organisation’s recognition of the skill and the personality of an individual that will suit and best serve their purposes.  At TRACC, Mohamed actually has engineers, a doctor and a psychologist in the team.

One aspect that was touched on was retention of as much as attracting new talent and one of the ways Sarah looks to achieve that at Talk PR is in the organisation’s ‘Learning & Inspiration Programme’, which consists of 52 Masterclass workshops, each geared around personal development for everyone in the agency, from junior to board level.  They include everything from helping people to present or run meetings, to handling conflict and business and financial management.  They also aim to inspire the team by getting external speakers in and organising cultural trips plus development for the team’s client relationships too, including measurement and evaluation or helping to pitch great stories to the media and influencers.

When summing up, the three guests offered the following advice between them when it comes to attracting the best talent to the industry:

#ad – Many thanks to global media intelligence provider CARMA for supporting the series of shows produced from ICCO.  Please do visit their website to find out more about how they can help you deliver actionable insights through media monitoring and PR measurement.

In Part 2 (starting at 20:05), Russell spoke with Pascal Beucler, Senior Vice President & Chief Strategy Officer, Global, MSLGroup on the topic of ‘Brand culture in the conversation age’, which was the title of the presentation he had given at the conference earlier that day.

Brand Culture in the Conversation Age from MSLGROUP

Pascal said that his talk was based around how PR has evolved from Public Relations to People Relations, creating relationships through content that is full of emotional connections.

He explained this further by talking about how the z-generation, born between the 1990’s and 2010, or those a little older, born between the 1980’s and 2000, have a relationship to brands that is based on mutual respect and parity – that is not top down or intrusive but based on choice, desire, attraction, seduction – and if it is like this it works, otherwise it doesn’t work.

The example of a campaign that MSLGroup had worked on recently that Pascale said was viral video rather than an advert that creates a dialogue between [the brand and] the target they want to address, was the superb Always #LikeAGirl campaign.

Pascale believes the genius behind the campaign is that P&G and Always are saying they deliver much more than protection every month but they deliver a vision of young girls based on the understanding they have a strong desire to be free of the chains that society and men put them in.  This for him, is an example of New Age relationships between brand and people.  It’s not about telling you my product is better than another one, but instead saying there is an issue and so why don’t we discuss it and find a solution.

Another area Pascale touched on in his talk was that of gamification, which he sees brands using in two ways.  Firstly, gaming is a huge trend for millennials but also for older people, mainly because the smart phone is always in our pocket and so when we have free time, as well as using it to communicate, we use it for gaming and so it provides a perfect compatibility and convergence between the device and the will to be gaming.

The other reason Pascale said gamification is important is due to the power of data created by millions of people on the way they play that you can use to your advantage.  He used the Deutsche Telekom “Sea Hero Quest” as a great example, which, as quoted on their website, was “designed to create the world’s largest crowd sourced data set benchmarking human spatial navigation, helping bring scientists one step closer to developing new diagnostic tests for dementia.”

Pascale believes this kind of activity gives gamification another dimension, something he calls, Brand Utility, where the brand becomes something useful in your life.

Pascale finished with what he saw as the main drivers are for brands in the conversation age, which were:

In final part (starting at 44:18) Russell spoke to Petra Sammer, Partner and Chief Creative Officer at Ketchum Pleon Germany to discuss more about the topic of her presentation at the event, which was titled ‘Turning companies into storytellers’. 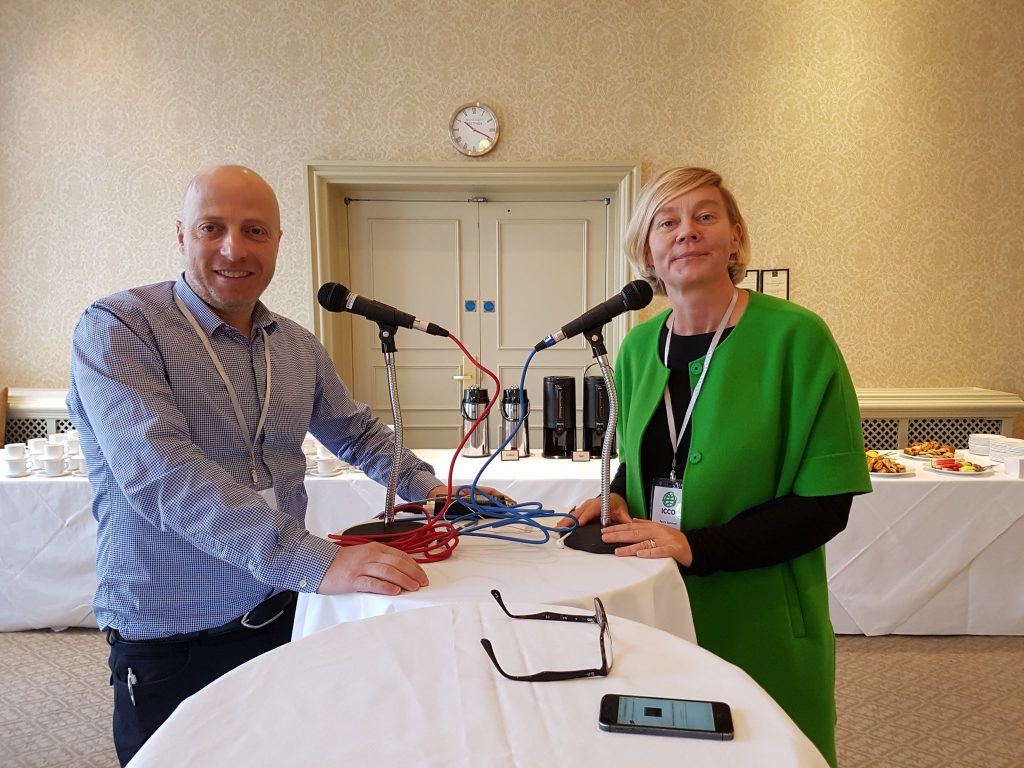 Petra advised listeners to be clear when it comes to defining storytelling as there are at least four ways to do so:

Petra said that we see the rhetoric technique being used in the PR industry within media training when teaching clients to be more personal and emotional.  She believes that PR is naturally very good at journalism, where it comes to framing a story and that many in the industry are good at corporate and brand identity too.  However, where she feels there is more learning required, is in the original meaning of storytelling, i.e., how authors and scriptwriters tell a story, and she suggests that there is perhaps a need for more skills need in this area to enable us to show emotion or empathy, particularly when it comes to real narrative.  She puts this issue down to the fact that many people in the PR industry, along with end-clients too, are, in her opinion, facts and information driven and therefore, to be able to show emotion, empathy or make people laugh or even cry, is a skill that is rarely seen.

Whilst Petra thinks that Christopher Booker’s Seven Basic Plots to a story is brilliant:

in her experience, when talking with clients, it can be a bit confusing.  So where these categories could be helpful is when interpreting a story backwards and she used IBM turning themselves into a consulting business as an example of Rebirth. She said a good place to start is to watch Simon Sinek’s Ted Talk ‘How great leaders inspire action’ and his reference to the Golden Circle, starting with the ‘Why?’

However, Petra’s own talk at the conference was about the model built on the four fundamental desires that we all have, which she listed along with brands that could be identified with them:

All previous shows of the series are available on Soundcloud or itunes and please, if you subscribe, can you give the show a positive rating and review on itunes in particular.  You can also now follow the show on Twitter and Facebook – please get involved!